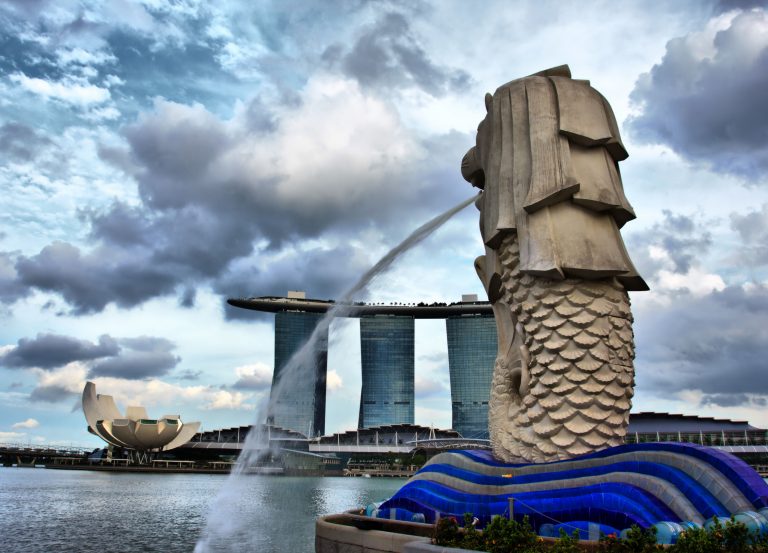 The Merlion: A half-fish and half-lion beast, is a fitting symbol of Singapore. The "Singa" or lion represents the animal that a Sumatran prince saw resembling half lion, and half fish. It is a tribute to Singapore`s history as "Temasek", the ancient sea town.

Symbolism of the National Flag: Red symbolises universal brotherhood and equality of man while white signifies purity and virtue. The crescent moon represents a young nation on the rise and the five stars signify the ideals of democracy, peace, progress, justice and equality.

Economy: The island state, though small in size and population, (almost 5.638 Million people) has become a reputable financial centre, a key regional trading centre, has the world's busiest port, and a top location for investment. Often cited as a model for transparency, efficiency and political stability, Singapore has earned the reputation of being one of top ten less corrupt countries of the world, as of February 2018.

Infrastructure and Accessibility: Singapore is well connected via sea, air and telecommunications to all parts of the world. Singapore's Changi Airport serves more than 100 airlines which fly to over 400 cities in about 100 countries and territories all over the world. It has been acclaimed as best airport in the world for the sixth consecutive year in March 2018.

Geographical location: It is 136.8 km north of the equator, between longitudes 103 degrees 38′ E and 104 degrees 06′ E. Located at one of the crossroads of the world, Singapore's strategic position has helped it grow into a major centre for trade, communications and tourism.

Smoking: Smokers under 18 years old will get a hefty fine.

Alcohol/Drunkenness: Purchase and consumption of alcohol is prohibited to those below 18 years of age.

Piracy: It is an offence to import pirated material; offenders may either be fined or jailed.

Employment: Student Pass holders are strictly not allowed to engage in any form of employment, whether paid or unpaid, or in any business, profession or occupation in Singapore. Violators will be prosecuted. (For more details, please refer to websites: www.mom.gov.sg; www.ica.gov.sg; www.mha.gov.sg)

The island is warm and humid all year round, with slight temperature variations between the average maximum of 31 degrees Celsius and minimum of 23 degrees Celsius.

Culture and religion remain entwined in Singapore. Throughout the year, a constant stream of festivals and celebrations is held in the streets and temples  and reflects the diverse beliefs and backgrounds of this multicultural society, comprising Buddhists, Taoists, Muslims, Hindus, Christians and Sikhs.

The standard of living in Singapore is amongst the highest in Asia. Compared to countries in western continents, the cost of living is relatively low, and basic items like food and clothing are very reasonably priced.

When planning one`s budget, the following items are to be considered:

An international student in Singapore spends on average S$750 to S$2,000 a month on living expenses. This amount varies depending on your individual lifestyle and course of study.

These estimated cost ranges in the table below give a rough guide of the basic expenditure an international student may incur per month.

To know more about the exchange rates based in your home currency, please visit: https://www.oanda.com/currency/converter/.

Eating is a national pastime in Singapore. Furthermore, with the variety of places to enjoy this pastime, it is no surprise at all if the phrase "eat to your heart's content" had originated from Singapore.

Malay, Chinese, Indonesian, Peranakan, Indian, Thai, Japanese, Korean cuisine, and more compete with one another in the "battle of the taste buds"!

It is perfectly safe to drink water straight from the tap in Singapore. However, for those who prefer bottled mineral water, local supermarkets and groceries always have ample stock.

The electrical current in Singapore is 240 volts AC, 50 cycles per second. Singapore uses the square-shaped three-pin plug. You may need an adapter or transformer for foreign appliances, which are available at most hardware/electrical stores.